The name Tyler Aul popped up on every GTI customer’s radar this past summer as he began racing his APR Tuned MK7 GTI at the drag strip. In early August, Tyler was able to achieve a respectable [email protected] MPH shattering the previous records and beating our own advertised results by more than a full second!

Following Tyler on social media, he stated he was confident he would have the first MK7 GTI in the 11’s. Unfortunately, he ran out of time and had to store his vehicle for the next few months as he took a tour overseas to serve his country. In the months following others attempted to top his record, but the best of our knowledge, the record stood at the top, leaving the prospect of being the first in the 11’s an obtainable goal during his return in December.

Upon his arrival back to the states, Tyler made no changes to the car and headed back to Orlando Speedway for another shot at the 11’s. With ambient temperature a healthy 30F lower than the summer, he was confident of success and on his first past, the record was achieved. Tyler was then able to top the record again as he got more passes, ultimately resulting in a very impressive [email protected] His record is now nipping at the heels of several AWD MK7 Golf R stock turbo records, despite lacking all wheel drive, or a larger turbo.

We at APR are here to say Congratulations Tyler and thank you for choosing APR. Your enthusiasm is a big part of who we are as a company and we’re very pleased to be a part of the excitement surrounding the community with this achievement. Go Tyler and Go APR!

Tyler’s mod list on his record pass was as follows: 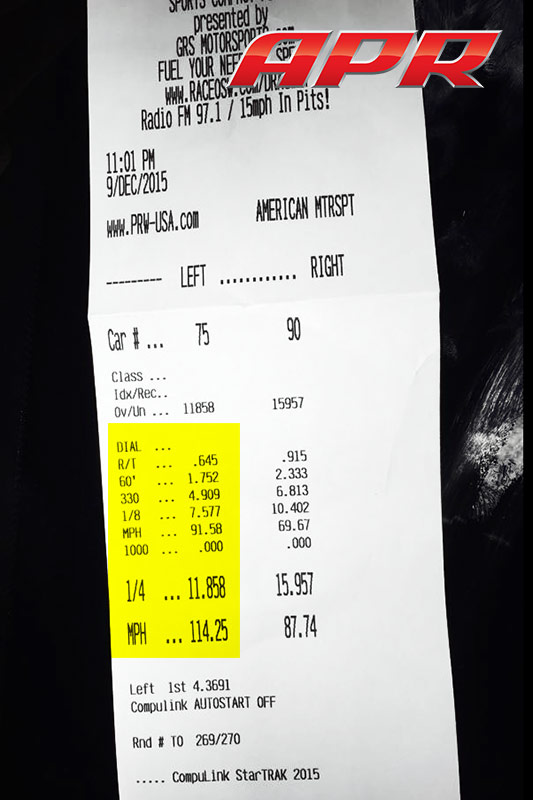