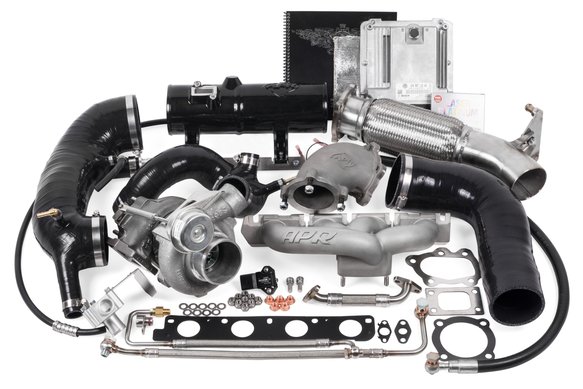 Learn More
Does it fit my vehicle?
4

APR is pleased to present the 2.0 TSI EA888 Gen 1 Stage III GTX Turbocharger System! In 2008, shortly after the worldwide release of the 2.0 TSI engine, Volkswagen of America commissioned APR to build the Stage III GT Turbocharger System for their SEMA concept cars. Successes of these concept cars lead to the first release of the APR Stage III Turbocharger System, based on the then available Garret GT turbocharger, and became a worldwide phenomenon. In the years since, APR has continued to work with VWoA, Volkswagen GmBH, VWVortex and BFGoodrich to deliver more concept cars for SEMA, Wörthersee in Austria, as well as other events around the world, while APR continued testing the latest in turbocharger technology. With the introduction of the Garret GTX2867R Turbocharger, APR has raised the bar further and redefined the standard by which the VAG community measures performance, reliability, drivability and quality. Gone are the days of compromise where low-end response meant excessive backpressure, compressor surge, and extremely limited top end performance. True to APR's mantra of Performance without Compromise the days of shredding tires on front wheel drive vehicles are rapidly disappearing thanks to the new Gold Standard in ECU torque management calibration strategies only APR can deliver. APR's endless pursuit of perfection has resulted in the most comprehensive 2.0 TSI turbocharger system in the world. The 2.0 TSI is completely transformed the second it meets an APR Stage III GTX Turbocharger System. Power immediately jumps to 423 horsepower with 387 ft-lbs. of torque on tap using 93 octane fuel on a completely stock and unmodified factory fueling system. Switching to APR's 100 octane race fuel mode, power shoots up to 458 horsepower with 409 ft-lbs. of torque all at the driver's command. This level of extreme performance is just a taste of the system's full performance capabilities. Software Included.

Install Instructions
Please note: Specific software is required to use this system. Software is included. The software installs to your vehicle's factory ECU. Software can only be installed by an Authorized APR dealer. Software compatibility must be checked before purchase. This system also requires other hardware to function properly, including: Midpipe, Intake, Intercooler, transmission software, and spark plugs. This system may require transmission and engine internal upgrades.