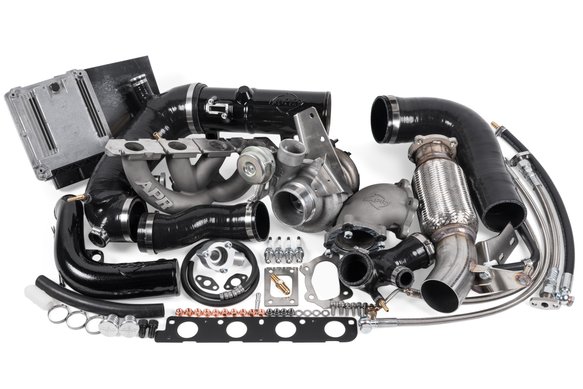 Learn More
Does it fit my vehicle?
APR is pleased to introduce the 2.0T FSI Stage III GTX Turbocharger System. Producing over 405 horsepower on 93 (R+M)/2 octane and 449 HP in racing configurations, Stage III GTX places the 2.0T FSI's accelerative performance in the same league as that of large V8 supercharged muscle cars and sub $400,000 exotic sports cars. The new APR Stage III GTX Turbocharger System represents a large leap in technology over our previously available GT Turbocharger System. The new system's response is much quicker, spooling hundreds of RPM sooner thanks to the latest in Garrett turbocharger technology and advancements in the ECU Upgrade. Further refinement of the fueling system increases the system's reliability and drivability. A substantial increase in horsepower and torque results in roughly a 30-50 HP gain in the area under the curve over the previous system. As you hear a new exotic growl from your exhaust system, expect exhilarating g-force levels sure to put a huge grin on your face! Software Included

Install Instructions
Please note: Specific software is required to use this system. Software is included. The software installs to your vehicle's factory ECU. Software can only be installed by an Authorized APR dealer. Software compatibility must be checked before purchase. This system also requires other hardware to function properly, including: HPFP, Injectors (MS100041 or 06F 906 036 F), a Bosch 200 bar high pressure rail sensor (06J 906 051 D) (Pre MY2007), Midpipe, Intake (IC100035), Intercooler, transmission software, and spark plugs. This system may require transmission and engine internal upgrades.