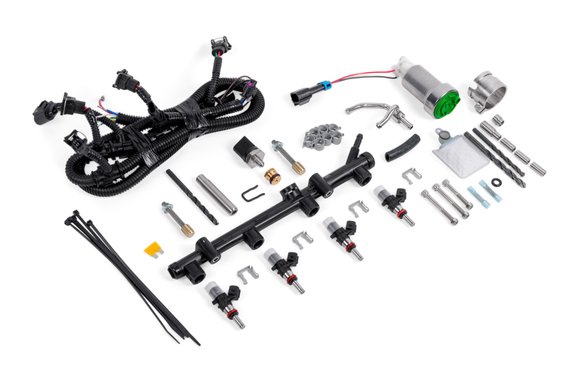 Learn More
Does it fit my vehicle?
7

This part is legal under the provisions of EPA’s Tampering Policy dated November 23rd, 2020.

See Emissions Details
The APR Fueling System is a comprehensive upgrade required to safely support Stage 3+ power levels. The upgrade includes a larger in-tank low pressure fuel pump (LPFP) and adds multi-port injection (MPI) to the factory manifold on North American vehicles. Both upgrades are ethanol compatible. All necessary hardware is included for a seamless integration and the system is fully controlled by the factory engine control unit (ECU) thanks to APR's ECU Upgrade. Fueling System Overview: The 2.0T Ea888 Gen 3 engine uses a returnless, pulse width modulated (PWM) controlled, in-tank low pressure fuel pump that feeds a cam-driven high pressure fuel pump (HPFP), and gasoline direct injection (GDI) injectors. Some models also include multi-port injection (MPI) injectors, which are only used for emissions reasons under light driving. The factory fueling system maxes out at below APR Stage III+ power levels before headroom for safety and longevity decreases dramatically. To support higher power levels, the APR Fueling system upgrades several components. First the LPFP is upgraded to a larger, 305 LPH ethanol-compatible unit, mounted inside the factory fuel basket with the included APR mounting hardware. At its inception, the pump is the largest readily available pump of its kind, both physically compatible with the factory fuel basket, and fully compatible with the factory PWM fuel pump controller without additional controllers. Next, on North American engines, four, 980cc, ethanol-compatible, Bosch Motorsport MPI injectors, capable of satisfying power levels that outreach those possible with the APR Stage III+ turbocharger system, are added to the factory manifold. All necessary mounting hardware, sensors and harnesses are included, including APR's Fuel System distribution block. The block properly distributes fuel to the newly added MPI injectors and factory GDI injectors, bypassing the tiny MPI injector orifice found on some factory equipment. Port injection also brings the welcomed benefit of continuously cleaning the factory intake valves. Due to the lack of fuel spraying on intake valves on direct injection engines, power robbing carbon buildup has plagued their existence since their inception. Since the APR Fueling System brings port injection back to the engine, buildup is greatly reducing, meaning more power, and less labor intensive maintenance! While the system is essentially plug-and-play with the included mounting hardware and wiring harnesses, the factory ECU is incapable of controlling the new setup without significant modification. APR's Calibration Experts spent months fully recalibrating the factory engine management system to operate with both MPI and GDI injectors. New sensors were added to the system to provide the ECU with accurate closed-loop control, rather than resorting to risky tricks or external controllers. The end result is simple. More fueling headroom and more power!

7
This part is legal under the provisions of EPA’s Tampering Policy dated November 23rd, 2020. The company has reasonable basis (test results) to verify that this product allows the vehicle to operate within legal emissions standards and is therefore legal to be sold for on-street use in all states that accept the legal provisions of the Clean Air Act and the EPA Tampering Policy. This product is NOT LEGAL FOR SALE OR USE IN THE STATE OF CALIFORNIA. Testing with the California Air Resources Board, in order to achieve 50-state compliance, is pending with CARB. Once testing is complete with California, and an E.O. number is issued, this product will be updated to 50-state legal status.
Install Instructions
Please note, this system is only designed for use with with appropriate software. This kit is designed for NAR vehicles without factory MPI (multi-port injection).