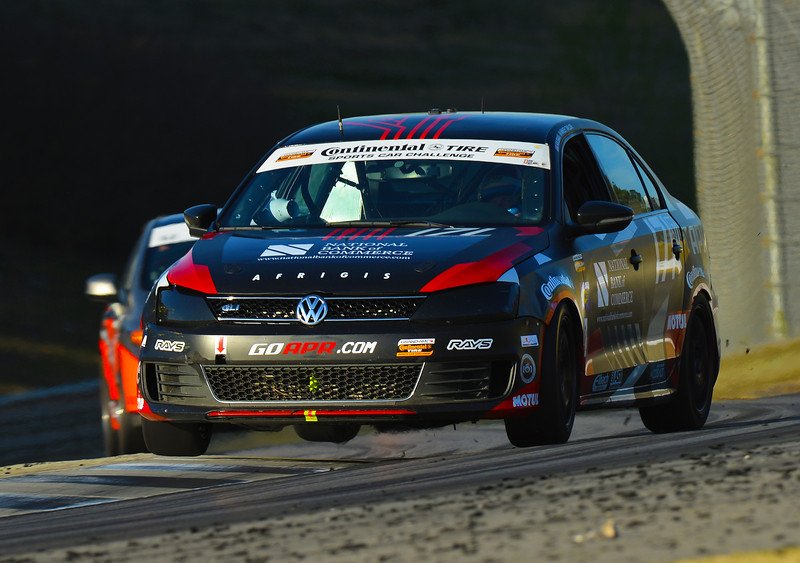 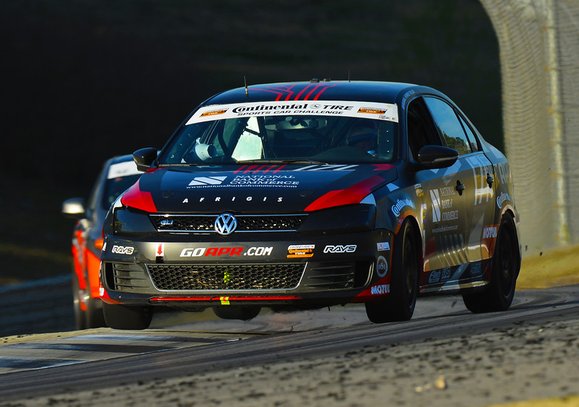 April 9, 2013 (Opelika, Ala.) – While retiring both the no. 171 and no. 181 APR VW Jetta GLI’s from Saturday’s Continental Tire Sports Car Challenge race was disappointing for the APR Motorsport squad, there were still plenty of smiles under the team’s awning in the paddock of Barber Motorsports Park in Birmingham, Alabama.

Racing in front of dozens of guests from APR, National Bank of Commerce, and distributors and retailers of APR, the team had a large group of supporters that cheered on APR’s Jettas as they came through the CTSCC field. With qualifying cancelled due to an on-track incident, the starting order was set on championship points, putting the no. 171 APR VW Jetta GLI driven by Michael Taylor and Ian Baas in ninth while the no. 181 APR VW Jetta GLI of Aleks Altberg and Josh Hurley would start twenty-first.

Both Taylor and Altberg would race through the field in the opening hour of the two hour and thirty-minute race, with Taylor advancing to fifth and Altberg up to twelfth.

After Taylor turned the no. 171 APR VW Jetta GLI over to Baas, he was hit by two things – a drive-through penalty, and then another car, which damaged the suspension of the car badly enough that Baas had to pull off the track.

“I had a great stint coming up to fourth, and when we had the yellow at the 45 minute mark I came in for a change of drivers,” said Taylor. “And then things didn’t very well after that. We will go back and regroup to improve for the next race. With so many guests from National Bank of Commerce, APR, and the Auburn area, we had a great time showing them what we do. A DNF is not as good as a podium but as long as our guests had a good time, we are happy.”

“It’s frustrating for our car to run so well and not have anything to show for it at the end of the race,” said Baas. “Here’s the thing about our penalty – we were given a wave by and there was a car in front of us who was also supposed to do the wave-by, but he wouldn’t move. So I went by him, as did other cars, and we received a penalty for passing under yellow. It completely ruined our chance for a good finish. In front of so many people from APR, we wanted to put on a good show. I know everyone had a good time but it would have been much better to have a stronger finish.”

Shortly after Altberg turned the no. 181 APR Jetta GLI to Hurley, Hurley would suffer damage to the car’s cooling system when it was hit by debris. The damage would lead Hurley to retire it from the race. Hurley had only received the call to race for APR in Barber on Thursday, but was glad to be back behind the wheel.

“With all of our practice done when it was cold, we had to roll the dice a bit with the setup,” said Altberg. “We didn’t quite nail it like we needed to, but the opening stint was a total blast and I had a good time passing a lot of cars with our Jetta. But we learned a lot and I was glad to have Josh there to help with his input on the car.”

“Getting the call so late in the week was a nice surprise, especially on such a big weekend for APR,” said Hurley. “The car was really good, we never got a feel for what it would do in the dry, but all things considered it was pretty good. Then all of a sudden the alarm on the dash came on, something went through the bumper and took out a coolant line, and that was it for us.”

The APR Motorsport VW Jetta GLI’s will be back in action at the next round of the CTSCC at Road Atlanta in Braselton, Georgia on April 20. The race will be streamed live on SPEED2.com.