The APR Motorsport Team left VIR for the Bosch Engineering 200 still in the lead in the ST class but down their GS entrant due to a complete write off towards the end of the race. As this weekend brings the Memorial Day Classic at Lime Rock Park, APR Motorsport has a bright outlook for the GTI’s but travelling lighter as there was not enough time between races to properly build a new S4 for GS.

APR Motorsport will find that time during the break after the New Jersey race to build a new S4 to be fielded at Mid Ohio. Gary Gibson and Josh Hurley will be back in action and looking for a podium with just a little bit of good luck. It’s been another tough season for the S4 so far but favorable rules package adjustments prior to the VIR race gives APR a good chance at finally showing some speed this season. “Our drivers and team have done a fantastic job with the Audi S4 this year and last year. We didn’t expect to be very competitive in our first year out with the new car but we hope for a little more out of the second season than we’ve had thus far. There has been some talk around the paddock that maybe that particular S4 was full of bad luck. If all it takes is replacing that S4 with a new one, well, we have our opportunity, so let’s hope that’s it”, muses Jeff Mishtawy, Director of Motorsport for APR.

Ian Baas and Ryan Ellis are excited about the race this Memorial Day Weekend as it’s a split race with ST and GS each having separate races, although on the same day. Ryan relayed, “When you are in the slower class, a lot of effort while driving can be spent maintaining awareness of the faster cars around you. A single class race gives Ian and me the chance to focus solely on our driving and the positions of our competition. We should see faster laps and cleaner racing which is exactly what I want as we continue to lead the Championship.” Ian and Ryan field the #171 VW DriverGear GTI MK6 and are slightly ahead in points over the Mini and Kia teams.

Kevin and Chris Gleason, Jr. will continue their incredible rookie season together as they look for their first podium in the #181 VW DriverGear GTI MK6. A few bumps from other competitors during the previous races have been all that’s keeping them from as much success as the #171 car. Kevin said, “We’ve been in the hunt every race and I know there are good things to come for Chris and I. I hope it’s this weekend and with the split races I feel we will have a good chance. One of the greatest skills required in the CTSCC is keeping the car healthy around such a group of aggressive racers. Chris and I are looking forward to a race where our abilities behind the wheel in conjunction with the APR Team’s ability to give a fast car determine the finishing order.”

The Memorial Day Classic at Lime Rock Park in Lakeville, CT begins this Saturday at 10:30AM EST and will air on SpeedTV at a later date. To follow the action in real time, as it happens, visit APR’s facebook page or check out the APR Motorsport website at www.aprmotorsport.com for more information. At the writing of this release, both VW DriverGear GTI MK6’s have shown great speed in the opening practice round with the 3rd and 4th fastest times posted. Go APR!
. 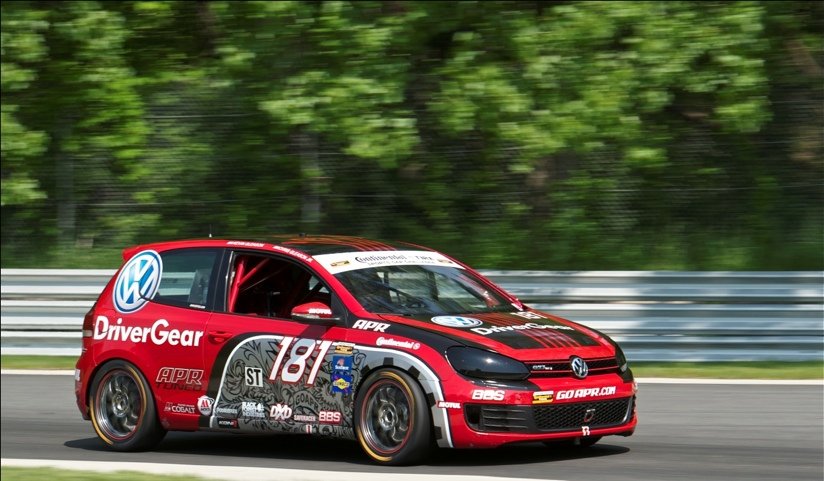