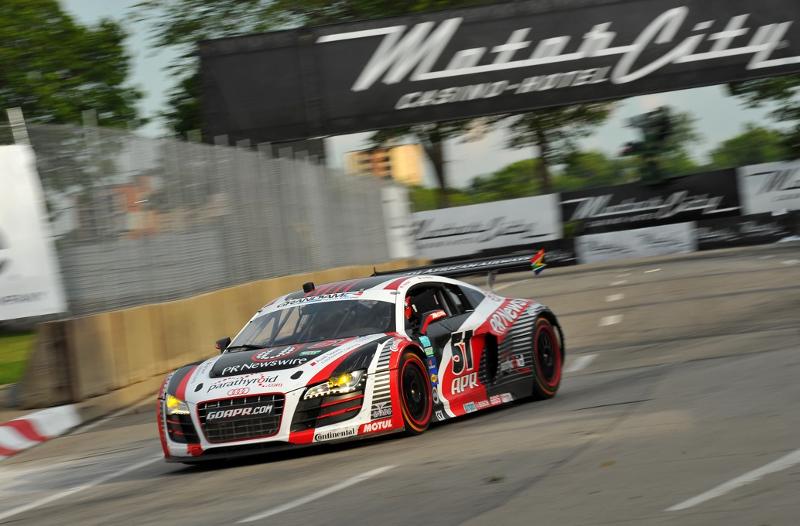 After running in fifth position in the early stages of the race in the no. 51 APR Audi R8 Grand-Am, Dion von Moltke inherited the lead when he stayed out while the GT cars ahead of him chose to pit under a full course caution period. When the race went green, von Moltke led the first laps for the Audi R8 in a North American professional racing series.

While leading, a brief rain shower fell on the south side of the Belle Isle circuit. Von Moltke arrived into turn one and the Audi R8 Grand-Am swapped ends, sending him sliding into the tire wall outside of turn one. While the car sustained no major damage, von Moltke needed assistance pulling the Audi out of the tire wall, and the car would lose two laps as a result. Once back underway, the APR Motorsport team gave the car a full service and Dr. Jim Norman replaced von Moltke at the wheel.

Norman would have a trouble-free stint at the wheel, putting the Audi in a position to take advantage of the wave-by twice under caution, putting the Audi back on the lead lap. When an additional caution period fell with minutes remaining in the race, the team elected to put von Moltke back in the car and mount a new set of fresh Continental tires. Armed with the new rubber, von Moltke made up several spots in the closing laps, finishing in eleventh position. Von Moltke also set the fastest lap of the race on his final lap, taking the checkered lap while running a 1:29.079.

“First of all, I’m really sorry for the guys that I made a mistake and cost us a great finish,” said von Moltke. “The car was hooked up and was running really well, I just got caught out going into turn one with that brief shower that made it much slicker than I anticipated. It’s really unfortunate because I know the team has worked hard to improve the car and the guys worked hard in the rain and wind all weekend to prepare the car so well. It was a great feeling to lead our first laps with the Audi R8 Grand-Am. This is disappointing, but we’ll move on and be ready for Mid-Ohio next weekend.” 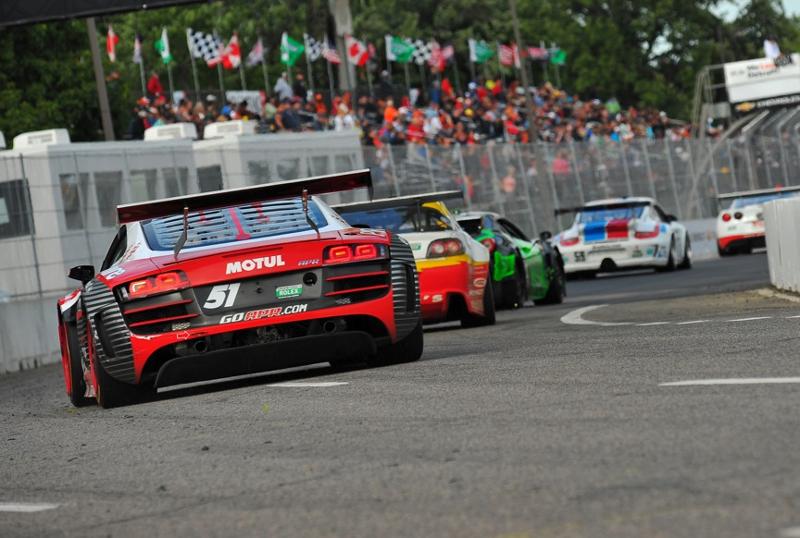 Norman, who topped Friday’s second practice session, was upbeat about the team’s performance following the race.

“Even though we didn’t have a great result, we had a really positive race in Belle Isle,” said Norman. “I’m really happy with how the APR Motorsport team performed this weekend. They were excellent, and chipped away at things all weekend. The car was great in the race, and we had a great strategy. We made some improvements to the car, especially under braking, that really helped the car a lot this weekend. We still had a strong run and just missed our first top-ten, and I really couldn’t be happier with how everybody worked together this weekend.”

Next weekend, APR Motorsport’s Rolex Series and Continental Tire Sports Car Challenge teams will be in action at the EMCO Gears Classic at the Mid-Ohio Sports Car Course in Lexington, Ohio. The Rolex Series race will be shown live on SPEED Channel on Saturday, June 9th, at 4:30 PM ET on SPEED Channel. The CTSCC race will be shown on Sunday, June 17th at 12:00 PM ET on SPEED.