APR Motorsport on the Podium at Homestead!

APR Motorsport on the Podium at Homestead! 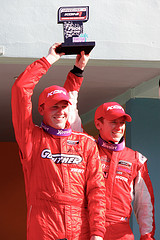 Homestead, FL, March 14: The APR Motorsport team turned in a solid performance at Round 2 of the KONI Sports Car Challenge. Both of the #171 and #181 VW GTI’s were reliable all weekend and consistently turned very competitive lap times. The team is focused on the 2009 championship and brought home all-important points for both cars.

The #171 GTI, driven by Rolex Daytona 24 Hour winner Ian Baas and SCCA VW TDI Cup Champion Josh Hurley qualified and finished in 3rd place. In the first turns of the race, Ian took second place and was able use the excellent braking and handling of the APR VW GTI to pressure the leader for the majority of his stint behind the wheel. About his stint Ian remarked “The action in the first few laps was like the end of a sprint race! After it settled down a bit I was able to take care of the equipment to make sure Josh would have a car to fight to the finish with.” After a perfectly executed pitstop by the APR crew, Josh took the wheel and stayed in the top three positions. In an opportunistic strategy change with about an hour remaining, the team elected to put in a splash of fuel to guarantee that Josh could go to the finish without concern about mileage. The team only lost a couple of positions during the stop but Josh put in a series of “qualifying laps” to charge to the finish line. On his way to the podium celebration Josh said “I am really proud of the efforts put forth by the team this weekend. We didn’t have the horsepower of the Civics but we really had the car dialed in. This podium was especially exciting for me because my long time sponsor Gunther Volkswagen is here and without their support over the years I could not have accomplished this.” This finish puts Ian and Josh only three points away from the 2009 Driver and Team Championship leads. “Consistency is the key for a championship and we are working hard to make sure we are in a position to win it. The team has worked very hard on reliability and it shows. These APR GTI’s run like they are under warranty!” remarked Ian. This finish was the second podium in four races for Ian and the #171 APR GTI.

In the #181 APR VW GTI, drivers Mike Sweeney and Aaron Povoledo had a challenging race. At the start of the race, Mike was given a stop/go penalty and began a strong charge forward by passing over half of the ST field. Unfortunately, a blown front tire again forced him into the pits. This was earlier than the planned pit window and the team reacted quickly to the setback by changing the race strategy. Aaron was put in the car while the team completed a full pit stop. After the stop, Aaron began to pick his way through the field cleanly and was able to bring the car to the finish in 16th position without a scratch. After the race Aaron said, “Our Crew Chief, Jeff Mishtawy, came up with a setup idea before the race and the team put a ton of work into making the last minute changes. The car was transformed; it was easily a top five finisher! A little bad luck made for a bittersweet race but we are quick enough to win some of these races.” Mike agreed with the sentiment, “It’s a tough one to take especially because the team worked so hard and we were very quick. Our biggest advantage was braking and handling, very classic traits for a GTI.”

This was APR Motorsport’s first race with the newly Grand-Am mandated inlet restrictor. “This restrictor hit us much harder than we had anticipated” said Ian, “The biggest effect was with how we accelerate out of slow-speed corners. We have to be absolutely perfect in these or we get run over by the competition.” Jeff added “Grand-Am is working hard to level the playing field in ST and it shows. Right now some cars have a big advantage but I am sure that the race officials will continue to work on the imbalance with those cars.”

APR Motorsport and the KONI Sports Car Challenge will next race at New Jersey Motorsports Park on May 1-3. You can keep up with the team at www.goapr.com and the series at www.grand-am.com/koni 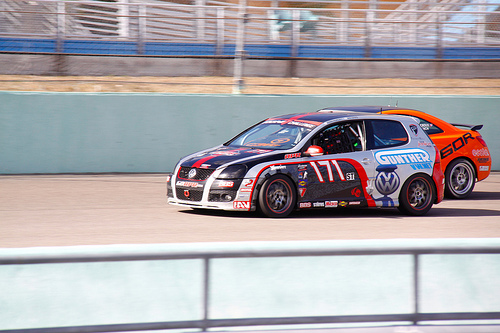