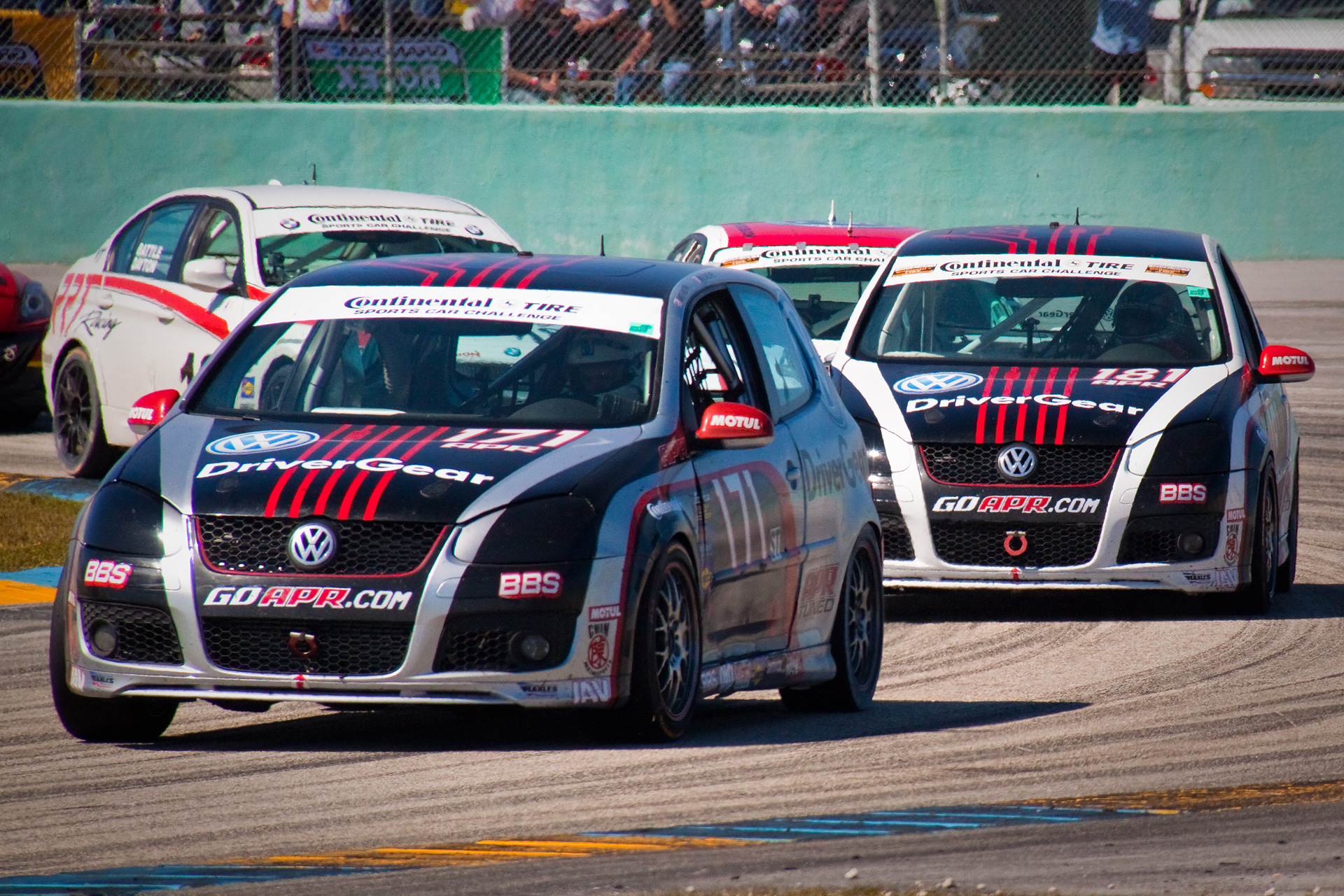 After experiencing some tough luck in round 1 at Daytona, APR Motorsport rolled into Homestead ready to get their Street Tuner championship chase back on track. With the cars refreshed between rounds, the drivers eagerly climbed aboard the APR Motorsport Volkswagen GTI’s. Both the 171 of Mike Halpin and Mike Sweeney and the 181 of Kevin Stadtlander and Josh Hurley were able to lap consistently amongst the top ten cars, while the APR Motorsport crew dialed in both MKV GTIs.

Stadtlander and Halpin then climbed aboard their respective cars for the qualifying session. Unfortunately, clear track was difficult to find and both drivers were unable to get in a clean lap before their tires overheated. The result was a 18th and 22nd place on the grid. Undaunted, the APR Motorsport crew began to devise a strategy to move up the order on race day.

As the cars headed for the grid a communications issue delayed both Volkswagen GTIs in getting to their grid positions. This meant that both APR Motorsport GTIs had to start from pit lane, effectively last position.

The field took the green flag, passed the pits and then the APR Motorsport GTIs were released. Immediately, Stadtlander and Halpin began to carve their way through the field. Passing cars left and right, they had both advanced from the back of the pack (35th and 36th place) all the way to the top 15. Then an hour into the race, a yellow flag enabling both Halpin and Stadtlander to dive into the pits for service from the APR Motorsport pit crew. Two tires, a full tank of fuel and with fresh drivers aboard, the 171 and 181 left pit lane to rejoin the fray.

With Sweeney and Hurley aboard the 171 and 181, the green flag dropped and the race resumed. Nose to tail with each other, the two VW GTIs began to move up the order. A few laps later, a suspension piece on Sweeney’s 171 succumbed to the rough curbs of Homestead Miami Speedway, dropping him down the order, leaving Hurley to carry the APR banner. Fortunately for Hurley, the APR Motorsport crew had setup the car to handle better when the track became greasy, as the track had become coated with debris, oil, and other fluids from the 74 car field. This setup enabled Josh to advance as high as 3rd place.

As it became clear that two of the front runners would likely run out of fuel, Josh backed off them to ensure that the 181 would finish the grueling 2.5 hour race. With 25 minutes to go, a yellow flag dropped, enabling the lead cars to save fuel. This yellow also had the effect of allowing everyone to cool their tires, thus negating the advantages of APRs setup.

When the track went green once again, there were only four laps remaining. Hurley did not have time to advance back up to the podium but he was able to take home a solid 5th place. This finish allowed Stadtlander and Hurley to claim the Sunoco Hard Charger award, which is given to the car that advances the most positions during the event.

After the event Josh had this to say, “What a great result. Kevin opened up with an awesome stint and handed me a car that was ready to charge to the front. The crew also set it up perfectly for the conditions, so this result truly belongs to them”. Stadtlander had similar thoughts, “It’s always fun to charge from the back and the APR Volkswagen GTI was perfect for the task. I can’t wait for round three where we should be on track for a podium”.

Sweeney and Halpin were able to come home in 18th position. After getting out of the car, Sweeney shared his feelings on the event, “It’s a shame to finish back here. The car was really good and the crew deserved a good result. We’ll just have to focus on getting a good finish at Barber; which is definitely in the cards seeing how Josh and Ian won and led flag to flag there last year. We’re not going to let a little bad luck get us down.”

About APR: About APR: APR LLC is an automotive engineering firm operating a 36,000 sq. ft. performance campus in Opelika, Ala. APR was founded in 1997 with a corporate philosophy of Integrity, Excellence and Innovation. APR’s Sole Mission is to provide the highest quality and most highly engineered aftermarket performance products available for Porsche, Audi and Volkswagen vehicles. Learn more at www.goapr.com

About Kevin Stadtlander: Pittsburgh, PA native Kevin is an Interventional Radiologist at Cleveland Clinic Florida in Weston, Florida, and is also an experienced racer with multiple wins and podiums in SCCA, PBOC, and NASA racing events. Combining his love for motorsports with his occupation as a physician, Kevin has been a member of the International Council of Motorsport Science and is currently the Medical Chief for Florida Region SCCA.