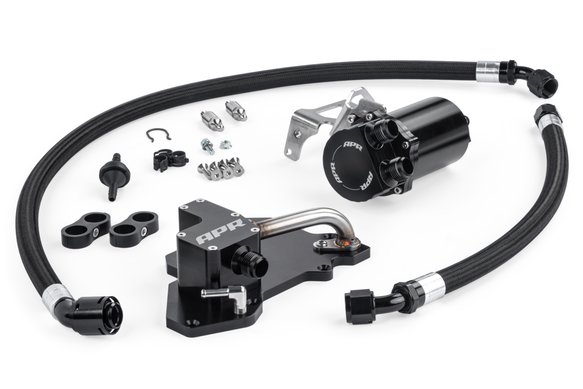 The APR Catch Can System with PCV Plate is a comprehensive upgrade to your engine's Positive Crank Ventilation (PCV) system. This factory-racecar-inspired-system takes a multi-step approach to addressing several performance robbing issues, and critical engine safety concerns, with the factory system.

Learn More
Does it fit my vehicle?
7

This part is legal under the provisions of EPA’s Tampering Policy dated November 23rd, 2020.

7
This part is legal under the provisions of EPA’s Tampering Policy dated November 23rd, 2020. The company has reasonable basis (test results) to verify that this product allows the vehicle to operate within legal emissions standards and is therefore legal to be sold for on-street use in all states that accept the legal provisions of the Clean Air Act and the EPA Tampering Policy. This product is NOT LEGAL FOR SALE OR USE IN THE STATE OF CALIFORNIA. Testing with the California Air Resources Board, in order to achieve 50-state compliance, is pending with CARB. Once testing is complete with California, and an E.O. number is issued, this product will be updated to 50-state legal status.
Install Instructions
Please note: This system does not work on PCV systems with the integrated blowby sensor such as those found on vehicle with engine code DETA. Vehicles with a washer fluid reservoir over the factory engine mount require part MS100199-A.

Firstly, when oil is sucked through the PCV system, it ends up in your intake tract. It’s sucked through your turbo, blown through the intercooler, and forced into the engine. Oil coats the intercooler, hoses, and everything in its path. Not only does this cause a mess, it lowers the effectiveness of the intercooler. More importantly, oil vapors lower your effective octane level, leading to performance robbing, and engine damaging, knock. This means less horsepower, and the possibility of engine damage.

Next, boost pressure and extreme heat is applied directly on the diaphragms within the PCV valve, and directly onto the factory activated charcoal filter solenoid, or N80 valve. The diaphragms can fail over time, causing massive boost leaks and over pressurization of the engine crankcase. The N80 valve can’t hold back the pressure, causing a boost leak into the activated charcoal filter. Boost leaks rob you of power, and can lead to over-spinning of the turbocharger. Pressurization of the crankcase causes oil to force past the piston rings, leading to potentially engine destroying localized pre-ignition points on the crown of the piston. Crankcase pressurization also results in blown seals, such as the infamous rear main seal. Each situation is bad. You’ll end up with less horsepower, possibility of turbocharger failure, and possibility engine and component damage.

Lastly, under racing, or hard-driving, and high G-force conditions, excessive amounts of oil can be forced through the system to be consumed by the engine. This goes beyond light oil and vapor ingestion discussed above. This is excessive amounts that causes plumes of smoke to pour from the exhaust, and engines to fail due to oil starvation. Oil starvation is a serious condition that can cause engine failures in fractions of a second. Often times when any warning of starvation has occurred, it’s already too late.

Firstly, the factory PCV is eliminated. A new race-inspired oil separation and drain-back system, or top-plate, is installed. The top plate is diaphragm-free, effectively eliminating the boost activated fail-points on the factory design. The active charcoal filter port remains, but a newly installed check-valve acts as another line of defense before the N80 valve. Internally to the plate, baffles keep oil from spilling out of the system. All oil galleys, including the coarse oil separation galley remain, promoting proper evacuation of crank-case gasses, and proper drain-back of oil into the engine, rather than the catch can.

Next, the APR catch can sits between the plate and the turbo inlet. Crankcase gasses build up within the engine and must be evacuated. The plate prevents coarse oil from easily spilling into the can. Remaining vapors and moisture travel through the can’s multiple layers of internal baffling, collecting in the can while leaving cleaner gasses to escape the system. This leaves your engine happy and clean, promoting more power, engine safety, and engine longevity in even the most demanding of situations!

The top plate, lines, and can all mount cleanly in the engine bay and are made from black-anodized billet-aluminum, with a T304 stainless coarse oil separation galley tube. The can drains easily with the integrated drain valve. All plate mounts are top-side, eliminating the chance of parts coming loose and falling into the cylinder head. High quality braided lines with swivel AN fittings and hose guides are included for a clean and professional looking install. Billet stand-off pegs allow you to raise and retain the engine cover, should you so choose. Precision bracketry makes for an easy, and solid install. Lastly, an optional washer fluid reservoir also allows for usage of the system on vehicles that otherwise would have a washer fluid reservoir blocking the install.