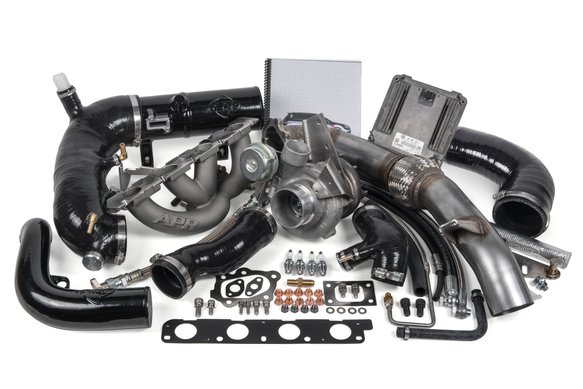 Learn More
Does it fit my vehicle?
4

Building upon over a decade's worth of experience with turbocharged Audi and VW engines, including over half a decade with direct injected engines, APR's Engineers have taken the 2.0T to ground breaking levels of performance without compromise. APR is pleased to introduce the 2.0T Stage III GTX Turbocharger System. Producing 452 horsepower on 93 (R+M)/2 octane and over 485 HP in racing configurations with nearly no increase in turbocharger lag over the vehicle's factory setup, Stage III GTX places the 2.0T's accelerative performance in the same league as that of large V8 supercharged muscle cars and sub $400,000 exotic sports cars. Thanks to the vehicle's all-wheel drive system, power delivery is unlike anything previously experienced in standard form. As you hear a new exotic growl from your exhaust system, expect exhilarating g-force levels sure to put a huge grin on your face! Software included

Install Instructions
Please note: Specific software is required to use this system. Software is included. The software installs to your vehicle's factory ECU. Software can only be installed by an Authorized APR dealer. Software compatibility must be checked before purchase. This system also requires other hardware to function properly, including: HPFP, Midpipe, Intake (IC100035), Intercooler, transmission software, spark plugs, and factory injectors. This system may require transmission and engine internal upgrades.