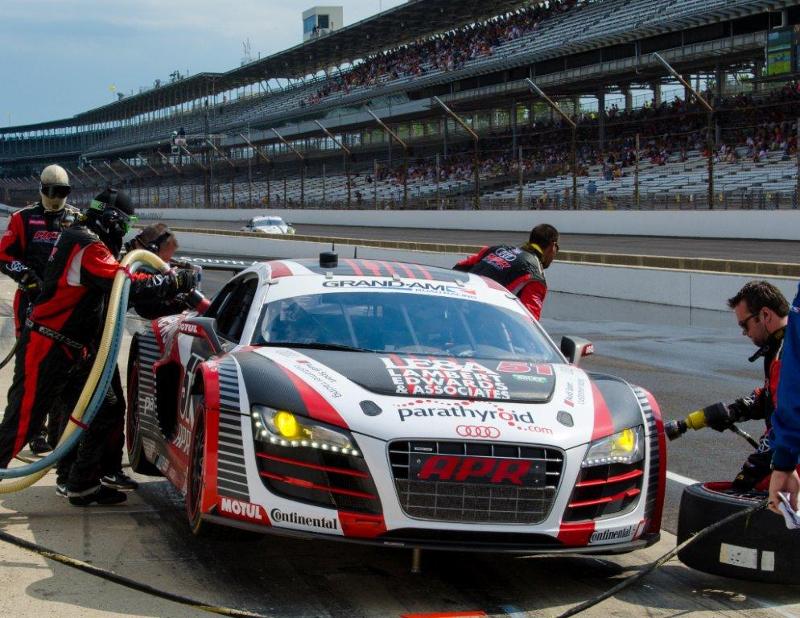 August 1, 2012 (Indianapolis, Ind.) – The first GRAND-AM event at the Indianapolis Motor Speedway was one of the wildest days on record in both the Rolex Sports Car Series as well as the Continental Tire Sports Car Challenge.

Both races were affected heavily by rain, meaning APR Motorsport would have to deal with the elements – as well as other cars – throughout the day.

Starting from fifth for the first Rolex Series Brickyard Grand Prix, Dion von Moltke – who celebrated his twenty-second birthday on race day – drove the no. 51 APR Audi R8 Grand-Am throughout the changeable conditions of the first half of the three-hour race. Running in the top-ten throughout his stint, von Moltke was punted into the gravel trap just past the halfway point of the race, with significant damage to the left rear of the Audi R8.

“We had such a good car today, it ran really well in the opening stages,” said von Moltke. “Having contact with another car and getting put into the gravel is really disappointing. I think on pace, this was our best race so far. The conditions were really tough with the drying track but we were in good shape. I hate it for the guys, but they were total heroes to get the car fixed.”

The team made repairs to the car and sent Dr. Jim Norman out to finish the race, with him and von Moltke being credited with 18th in the GT class when the checkered fell.

“We had a bit of an incident, unfortunately, which I thought was going to put us out of the race,” said Norman. “We had really good pace, Dion was reporting that the car was really good, and our strategy was playing out well. I was set to get in the car and do my stint, and I thought when we were hit it was all over. But the guys worked really hard to get the car back out and I was able to take the checkered flag at Indianapolis Motor Speedway. It was a good feeling and the car was perfect when I was out there.”

The two hour and thirty minute Continental Tire Sports Car Challenge race threw a major curveball at the teams as it had a red flag period. When the rain began to fall during a full course caution, APR Motorsport brought its cars in to switch from dry slick tires to rain tires. Shortly after, however, the race went under red flag for too much standing water on the circuit.

With several laps of running under caution before the race went green again, the team was forced to bring all the cars back in for dry tires. David Cheng and Aleks Altberg would end up as the best finishers, piloting the no. 171 APR VW GTI to an eighth place finish in the ST class, with Daniel La Riva and Christian Perez 18th in the no. 191 APR VW Jetta GLI.

“Things just didn’t work out for us with the way that the red flag and green flag ended up falling,” said Altberg. “I think we made the right choice to come in for rain tires, I was having a hard time keeping the car on track under yellow. But the track dried out really fast and then Grand-Am had us do all those laps under caution, and we had do an extra pit stop. I think we were in great shape for a top-five, but under the circumstances, we are happy with a top-ten. And to have the chance to race at Indy was surreal. It was a great experience no matter the finish.”

Unfortunately for teammates Nate Norenberg and Josh Hurley, their no. 161 APR VW GTI retired from the race in the first hour with a transmission failure, while Juan Alvarez and Juan Pablo Sierra’s no. 131 APR VW Jetta GLI retired after overheating due to a punctured radiator. The no. 41 APR Audi S4 of Hector Guerrero and Alex Popow also retired with a mechanical problem.