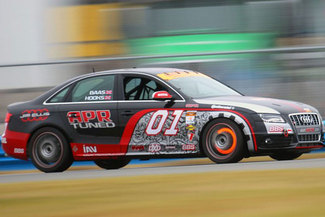 Taylor will also compete in the Porsche 250, Round 3 of the GRAND-AM Rolex Sports Car Series presented by Crown Royal Cask No. 16, sharing the No. 30 Racers Edge Motorsports Mazda RX-8 with Todd Lamb. The Porsche 250 begins at 1:30 p.m. ET (SPEED, live), followed by the Continental Tire Sports Car Challenge race at 5 p.m.

“I think we will be very competitive,” said Taylor, who made his lone start in the Continental Tire Sports Car Challenge at Virginia International Raceway in 2007, when he finished 21st in Street Tuner (ST) with Mark Jensen in an i-MOTO Racing Acura TSX. “Ian was really quick last month at Homestead, and from watching the in-car video, it looks really nice to drive.”

APR Motorsport is based in Opelika, Ala., not far from Barber Motorsports Park in Birmingham.

“We’re very excited to have Jordan on board to co-drive our Audi S4,” said Jeff Mishtawy, APR Director of Motorsport. “That’s going to be a very big weekend for us, and we expect to have hundreds of guests for our race. In addition to our Audi S4 – the only car of its kind competing world-wide – we will be unveiling the new Volkswagen Mk6 GTI that we will be racing in Street Tuner.”

APR Motorsport led the Continental Tire Sports Car Challenge ST class in 2009 with four victories and five pole positions – including three by Baas – in a two-car effort. Baas set a new record for most laps led in a season, while his No. 171 VW GTI led 41-percent of all laps in 2009.

Baas won the 2009 ST race at Barber for APR Motorsport, co-driving with Mesco Rookie of the Year Josh Hurley, and scored five podium finishes and placed fifth in the points. The 28-year-old driver from Noblesville, Ind., won the GT class in the 2006 Rolex 24 At Daytona in a Porsche GT3.

Taylor is one of two brothers competing in the Rolex Series. His older brother, Ricky, drives a Daytona Prototype owned by their father, two-time Rolex 24 winner Wayne Taylor – co-driving the No. 10 SunTrust Racing Ford Dallara with Max Angelelli.

The younger Taylor considers Barber to be one of his favorite tracks, from both the competition and ambiance aspects.
“I had my best races in a Daytona Prototype at Barber with Beyer Racing, when we used different strategy from the other teams and I was running third,” Taylor said. “I like the layout of the track, and the facility is amazing.”