On July 30th, APR’s S4 equipped with the Magnuson TVS1740 Supercharger System headed to Montgomery Motorsport Park in Alabama for a full day of endurance testing at the track with temperatures in the 100F’s. Records were first set using Magnuson’s off the shelf TVS1740 Supercharger System with APR’s included 100-octane software, resulting in an [email protected] MPH on Michelin PSS tires.

As the day progressed, the conditions worsened with temperatures reaching above 105F and the density altitude peaking above 4,200 feet. However, despite the terrible conditions, a new world record was achieved. APR’s R&D team swapped the supplied pulley on the Magnuson TVS1740 to a new APR prototype upgrade, scheduled for release in the near future, and achieved an 11.1 @ 121.58 MPH pass!

“Given the extremely poor conditions (4200ft DA) our 11.1 second pass will hopefully lead to a 10 second pass as conditions improve here in Alabama. S Tronic calibration improvements, additional hardware changes (removing the catalysts), and further refinement of the overall package will only push the platform to a place we’ve all wanted it to go.” Said Eric Urness, lead calibrator at APR.

For pricing, power figures and availability of the Magnuson TVS1740 Supercharger System, powered by APR, please contact Magnuson at http://www.magnusonproducts.com/

Details such as pricing, power figures and availability of APR’s upcoming TVS1740 Supercharger System Pulley Upgrade will be released in the future. 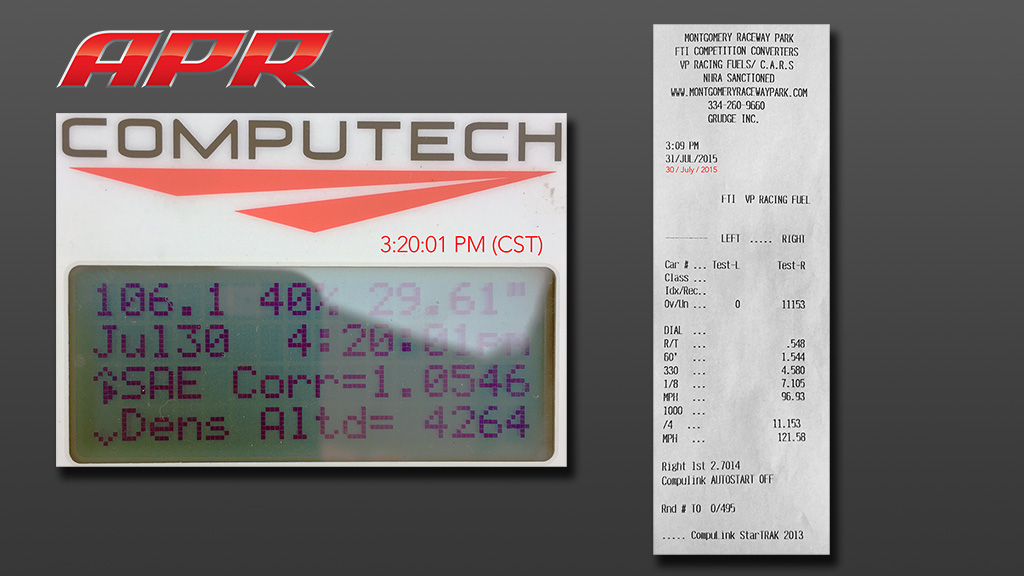