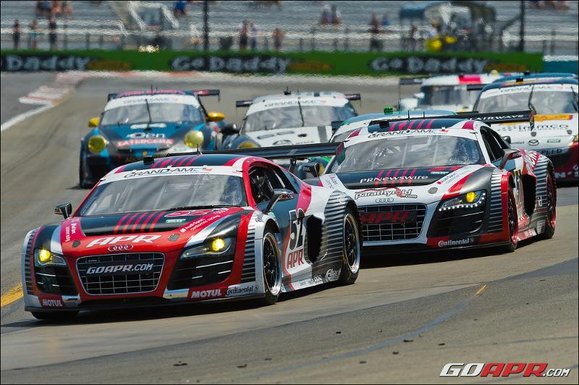 Basseng, from Neusalza, Germany, won the 2007 Rolex 24 at Daytona in the GT class. He has spent the past four seasons competing in the GT1 World Championship, but has class wins in the 12 Hours of Bathurst and the 24 Hours of Nurburgring in an Audi R8 LMS.

Rast, from Minden, Germany, made an impression on the Rolex Series paddock in 2012, taking the winning GT class car to the checkered flag in his first attempt at the race. Three times a Porsche Supercup champion, Rast also has a victory at the 2012 24 Hours of Spa – while driving an Audi R8 LMS – with Stippler. Stippler, from Bad Munstereifel, Germany has been a development driver of the Audi R8 LMS since 2008.

A driver announcement for the no. 51 APR Audi R8 will be made in the coming weeks.

APR will also unveil a brand new livery at the Rolex 24 at Daytona that it will use throughout the 2013 season. Both of the Audi R8’s will use an interim testing livery at the Roar Before the 24.

“Last year, when we competed in the Rolex Series for the first time in the 50th Rolex 24 at Daytona, it was a great moment for our organization after several seasons of racing and being competitive in the Continental Tire Sports Car Challenge,” said Stephen Hooks, owner of APR. “On a personal level, I was extremely proud to watch an APR Audi take the green flag – and the checkered flag – at the Rolex 24. Adding the second car with a lineup of factory drivers for Daytona will be another great moment for the team.”