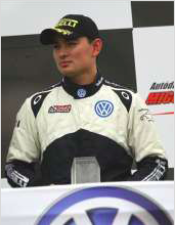 Auburn, AL: In the first of a coming series of driver announcements for APR Motorsport, VW Jetta TDi Cup standout Ryan Ellis will make his full-time debut in Grand-Am alongside veteran Ian Baas. The pair will pilot one of the team’s VW DriverGear GTIs.

During pre-season testing, Ellis was able to draw on his experience in the VW Jetta TDi cup series and was immediately up to speed in the Grand-Am spec cars. APR Motorsport Director Jeff Mishtawy said “We could see from the first session’s data onward that Ryan has the ability, smoothness, and patience we need in our drivers to be serious contenders for a championship.” During the successful test Ryan provided solid technical and driving feedback, factors which are very important to the team. Mishtawy continued “Ryan integrated very well into the team’s method of communication and data evaluation. It was quickly apparent that he would make a fantastic fit into our ST program. Just like with Josh Hurley, the VW Jetta TDi Cup has grown and developed the talent necessary to compete in Grand-Am”.

Mirroring the team’s feelings, Ryan is excited to be a part of the APR Motorsport VW DriverGear team in 2011. “I couldn’t be happier with the opportunity I have this year. I know that I have a great knowledgeable team with APR and a great teacher and co-driver with Ian. I think the 2011 season will provide a fantastic opportunity for me to prove myself as a driver and to learn a lot from Ian, the operations, and engineering of APR Motorsport. I could not ask for a better program to help launch my rookie year and career into Grand Am. I am especially excited to kick the season off at a venue as historic as Daytona.” For being a young rookie in Grand-Am, Ryan brings a wealth of experience having successfully raced everything from NASCAR late models to Spec Miatas, and even was twice crowned Virginia Red Bull Karting Champion. Already having been part of over 500 races in his 16 year driving career, the step up to APR’s ST program was logical.

Entering his 4th year as a driver for APR Motorsport, Daytona Rolex 24hr Winner Ian Baas is also quite happy to be returning to a championship contending car. Baas remarked “ I am thrilled to have Ryan as my Co-Driver for 2011, we have met only a few times but Ryan’s maturity was very apparent. He has already shown his aptitude in the VW Mk6 GTI when we tested back in October and we will have more testing before the Daytona race in January where the APR Motorsport / VW DriverGear GTI will be looking to start the season how we ended the last…with a Win!” About the Mk6 GTI Ian was optimistic, “ I had spent 2010 developing the Mk6 GTI and the GS cars for the team so I am very glad to be fighting for a championship again. This new generation GTI is definitely worth all of the work we put into it last year. As we proved at Miller, this car will be able to contend with the best in the class and with the hard work that this team is known for, we will be in the hunt until the very last lap of 2011.”