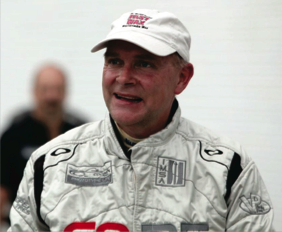 Opelika, AL: APR Motorsport is proud to announce the return of the Audi S4 to Grand Sport competition with IMSA Lite star Gary Gibson partnering APR veteran Josh Hurley. Both drivers have been working hard to prepare for their Grand Sport debut at the Grand Am 200 in Daytona, FL.

Despite the Audi being the first production-based racecar he had driven, Gibson was on front running pace within a handful of laps, quickly adapting to the Audi S4’s quattro all wheel drive. “We were very impressed with Gary’s approach to our first test. He asked all the right questions and clicked with the team straight away. His engineering based approach fits in perfectly with APR Motorsport’s methods and I expect Gary will be as competitive as possible when we roll off the trailer in Daytona,” said APR Motorsport Director, Jeff Mishtawy.

“I am excited about the coming season with APR Motorsport and the new challenges of the Continental Tire Sports Car Challenge,” Gary said after testing with APR Motorsport. “It was a very difficult decision to leave prototype racing and make the switch to sedans but I feel confident that teaming up with APR Motorsport in the Audi S4 will be the best possible way to make this transition. It is also the perfect situation for my marketing partner, Perfect Pedal. We feel that Grand Am and APR Motorsport represent the best way to grow and market Perfect Pedal.” Perfect Pedal is an aftermarket upgrade for the Logitech G25 and G27 equipped Racing Simulation Systems, which provides a realistic braking feel by using a hydraulic load cell to mirror real world brake pedals.

Despite being a rookie to Grand-Am, Gary brings a diverse racing background with him. He has raced both motorcycles and cars at the top levels of the sport and has contended for the IMSA Lite championship for the past three years. With that experience to build on, look for Gary to add wins in yet another form of racing to his resume this year.

Returning to APR Motorsport for the 3rd consecutive year, 2008 VW TDI Cup Champion Josh Hurley shared his thoughts on campaigning the Audi S4 in 2011, “I can’t wait for Daytona to start; we’ve made some serious improvements during the off season and on top of that, I have a stellar co-driver in Gary Gibson. He has not only shown the necessary pace, but he and I work well together and with the team. That team wide chemistry is what’s necessary to win championships, and that is our goal for 2011”.

About Gary Gibson: A lifelong racer, Gary has been racing since the age of 5, starting with short track speed skating. By his early 20’s Gary began road racing motorcycles and was a consistent front runner in the AMA Pro F-2 series. He then moved on to racing with four wheels, starting with SCCA Spec racers and the IMSA Sports Toyota Championship where he was the season runner up twice. Since 2008, Gary has been competing in the IMSA Lite championship with multiple wins and several podiums in the last three seasons.

About Josh Hurley: A Fort Lauderdale native, Hurley was the 2008 VW TDI Cup Champion. In 2009, he stepped up to the GRAND-AM Continental Tire Sports Car Challenge class, winning the MESCO Rookie of the Year award, as well as one race victory, two poles and five podiums. With backing from Fortis Watches Josh is once again charging to the front in 2010. To learn more about Fortis Watches visit www.Fortis-Watches.com. To learn more about Josh Hurley, please visit www.GoJoshHurley.com