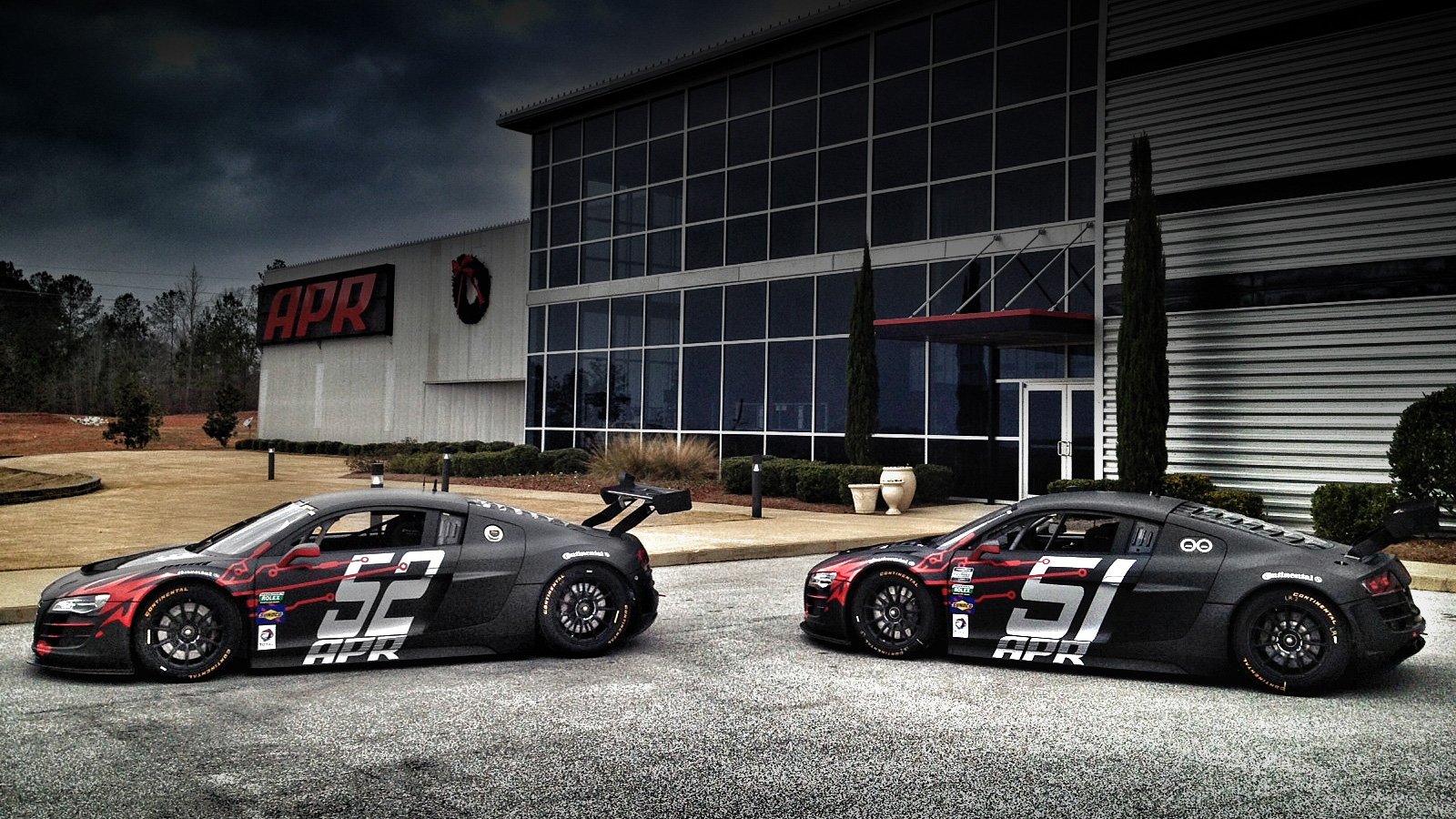 January 2, 2013 (Opelika, Ala.) – Not only is APR Motorsport unveiling a new-look testing livery for this weekend’s Roar Before the 24, but the team is proud to announce its driver lineup for the 51st Rolex 24 at Daytona. Americans Matt Bell and Alex Figge will join Canadians John Farano and Dave Lacey in the no. 51 APR Audi R8.

Competing in his fourth Rolex 24 at Daytona, Matt Bell, from Los Altos, California, will join APR Motorsport for the first time. A veteran in Daytona Prototypes and GT cars, Bell has also scored several wins in the Continental Tire Sports Car Challenge.

“I’m really excited for the opportunity to race with APR, after racing against them for so many seasons,” said Bell. “My first year in GRAND-AM was also their first year, so since day one they’ve been sort of the enemy. But they wouldn’t be if they weren’t doing things right so you respect them for what they’ve been able to do. I also work for the Audi Sportscar Center at Sonoma Raceway so the combination is pretty cool – and I probably have more miles in an Audi R8 than anyone else on the team, though not in an R8 race car! We have a strong driver lineup – I have competed against Dave this season and I truly trust driving alongside him – and I’m excited to see how our test goes this weekend.”

John Farano, from Toronto, Ontario, is the reigning Continental Tire Sports Car Challenge GS-class champion and Rookie of the Year and will be taking part in his third Rolex 24 at Daytona. Farano’s racing history includes the Grand-Am Ferrari Challenge series, Rolex Daytona Prototypes and GT class, as well as the Canadian Tire NASCAR Series. Farano will be busy during the Rolex 24 weekend, as he will also drive in the Ferrari Challenge races as well as the CTSCC season opener with co-driver David Empringham.

“I am very excited to be driving with APR alongside Alex, Dave, and Matt,” said Farano. “I can’t wait to be on track amongst this strong driver lineup and the rest of the APR team. It is my hope that this will be the beginning of a solid relationship between Tower Events and Grandstand Seating and APR Motorsport that will allow this association to continue to race together for years to come.”

Currently competing in the World Challenge GT class, Alex Figge, from Denver, Colorado, is a veteran of GRAND-AM Rolex Sports Car Series, American Le Mans, and ChampCar competition. He has scored numerous podiums and wins in his sports car career, and looks to pick up where he left off after competing in the Rolex 24 at Daytona in 2008.

“I am extremely excited to be back at the Rolex 24,” said Figge. “I last did the race in 2008 and I’ve been dying to do it again. Obviously in a 24 hour race you’ve got to have reliability and spot-on teamwork. Knowing that, I couldn’t be more positive about being with APR and Audi. I know from reputation and seeing with my own eyes that APR is a first class organization and I can’t wait to get started with them. The test can’t come soon enough.”

Lacey, from Toronto, Ontario, brings 20 seasons of GT-class racing to APR Motorsport. Twice a podium finisher at the Rolex 24 at Daytona, Lacey is also an Audi enthusiast – owning both an S5 as well as an R8 V10 – and is understandably excited about the APR relationship.

“I’ve known John Farano as a fellow Canadian and a competitor for a number of years, so I’m thrilled to join APR, Matt, Alex and John in what I think will be a very strong entry for the Rolex 24 at Daytona,” said Lacey. “Clearly APR has learned a great deal about the R8LMS platform over the last season and I believe that the car will be very competitive not only for the 24 Hours, but for the entire season.”

The four drivers will join APR for the first time in this weekend’s Roar Before the 24 at Daytona International Speedway.

As the fourth member of the no. 52 APR Audi R8, Baas, from Indianapolis, Indiana, is thrilled to rejoin APR for the Rolex 24 at Daytona. A former GT-class winner at the race, Baas also drove the no. 51 Audi R8 at both the Rolex 24 and Sahlen’s Six Hours at the Glen last season.

The Roar Before the 24 begins this Friday, with practice sessions scheduled throughout Friday, Saturday, and Sunday.