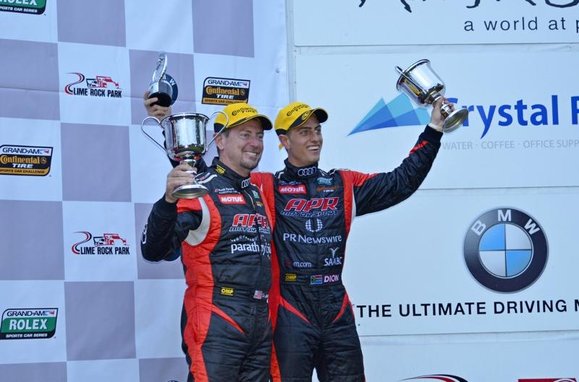 October 2, 2012 (Opelika, Ala.) – APR Motorsport, with drivers Dr. Jim Norman and Dion von Moltke, capped the first year of competition for the Audi R8 in the GRAND-AM Rolex Sports Car Series by finishing second in the GT class at the series’ season finale on Saturday at Lime Rock Park. After a challenging season in which the team developed the Audi R8 Grand-Am, it would score its best result in dramatic fashion at the final race of the year.

Norman made up several positions at the start of the race, before handing the car over to von Moltke in 10th position. While battling for position, von Moltke spun exiting turn three with the Audi making contact with two other cars. Luckily, the Audi sustained only cosmetic damage and von Moltke was able to rejoin the race.

With a long green-flag portion through the middle of the race, the APR Motorsport crew made the decision to pit von Moltke for fuel at the earliest moment that would ensure the car would make it to the finish. As a result, von Moltke went down a lap to the leading GT-class Porsche, but was able to get his lap back when the Porsche began saving fuel. A caution period with 25 minutes remaining would see the Audi cycle to third place when several other GT cars pitted under the caution.

Von Moltke took the final green flag in third place with lots of pressure from a chasing Ferrari F458 Italia. When the leading Porsche ran short of fuel with two laps remaining, the Audi was promoted to second place which von Moltke held to the checkered.

It was the first podium for Norman, von Moltke, APR Motorsport and the Audi R8 Grand Am in the Rolex Series. 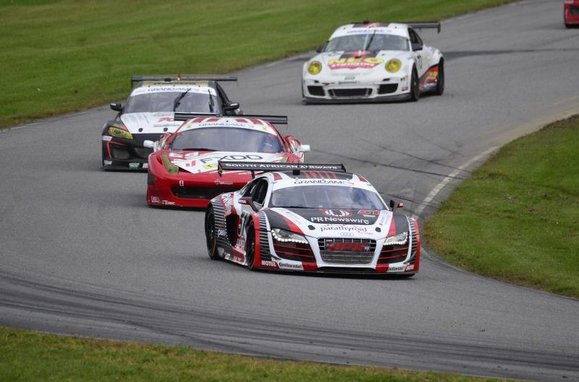 “Wow! I could not imagine a much better way to have finished off our season,” said von Moltke. “This result was possible thanks to every single person on our team. The guys really dug deep and gave us absolutely flawless pit stops every time, and this was one of the main reasons we finished on the podium. No one got many laps before the race and Jim hopped right into our Audi R8 and was throwing down awesome laps in his stint. He gave me the car in a great position and really helped keep me pushing over the radio throughout my entire stint. Our engineer Mark Scott improved our car each stint and for the final 25 minute sprint to the finish the car was fantastic, and that’s what allowed me to keep pushing and hold off the Ferrari. This has been a very special year for me to work with Jim, APR and Audi, and I am so thankful that I was able to deliver them their first podium finish in the Grand-Am Rolex Series and I hope to help to deliver their first win in the series in the near future!”

“Clinching the Grand-Am Rookie of the Year award is a great honor,” said Norman. “However, this would not have been possible without the tireless support of the APR team that made sure our amazing Audi R8 was safe and fast every single weekend. My co-driver Dion also gets a lot of credit for this award; it was an honor to be able to share this great car with such a wonderful driver, mentor, and friend. This has been a fantastic year and a great learning experience. I’m looking forward to next year when we win the GT championship for Audi!”

After entering GRAND-AM in 2008 in the Continental Tire Sports Car Challenge series, APR Motorsport expanded to the Rolex Series as a development partner for Audi Sport. Scoring a podium to close out the season was validation for the team, which faced its share of challenges throughout the season. In addition to scoring a Rolex Series podium in its first season, APR Motorsport was a race winner in its fifth straight season in the Continental Tire Sports Car Challenge.

“To say this year has been a challenge would be an understatement,” said Stephen Hooks, President of APR Motorsport. “It took every member of our team to work through the night to get the car to the finish at Daytona, and it seemed like we never stopped working throughout the year. Lime Rock started the same way – Dion was trying really hard on old tires to stay near the front and spun right in front of a field of cars. But the car was okay – the Audi R8 is a very tough race car – and the way it worked out we were good on fuel at the end and all of a sudden battling for the podium. Finishing second is just unbelievable. Never in my wildest dreams did I think we would end up on the podium at Lime Rock, but the crew gets all the credit for prepping the car and Dr. Jim and Dion for bringing it home. We are very excited now for next season.”

The 2013 Rolex Series season will kick off with the Rolex 24 at Daytona on January 24-27, 2013 at Daytona International Speedway.