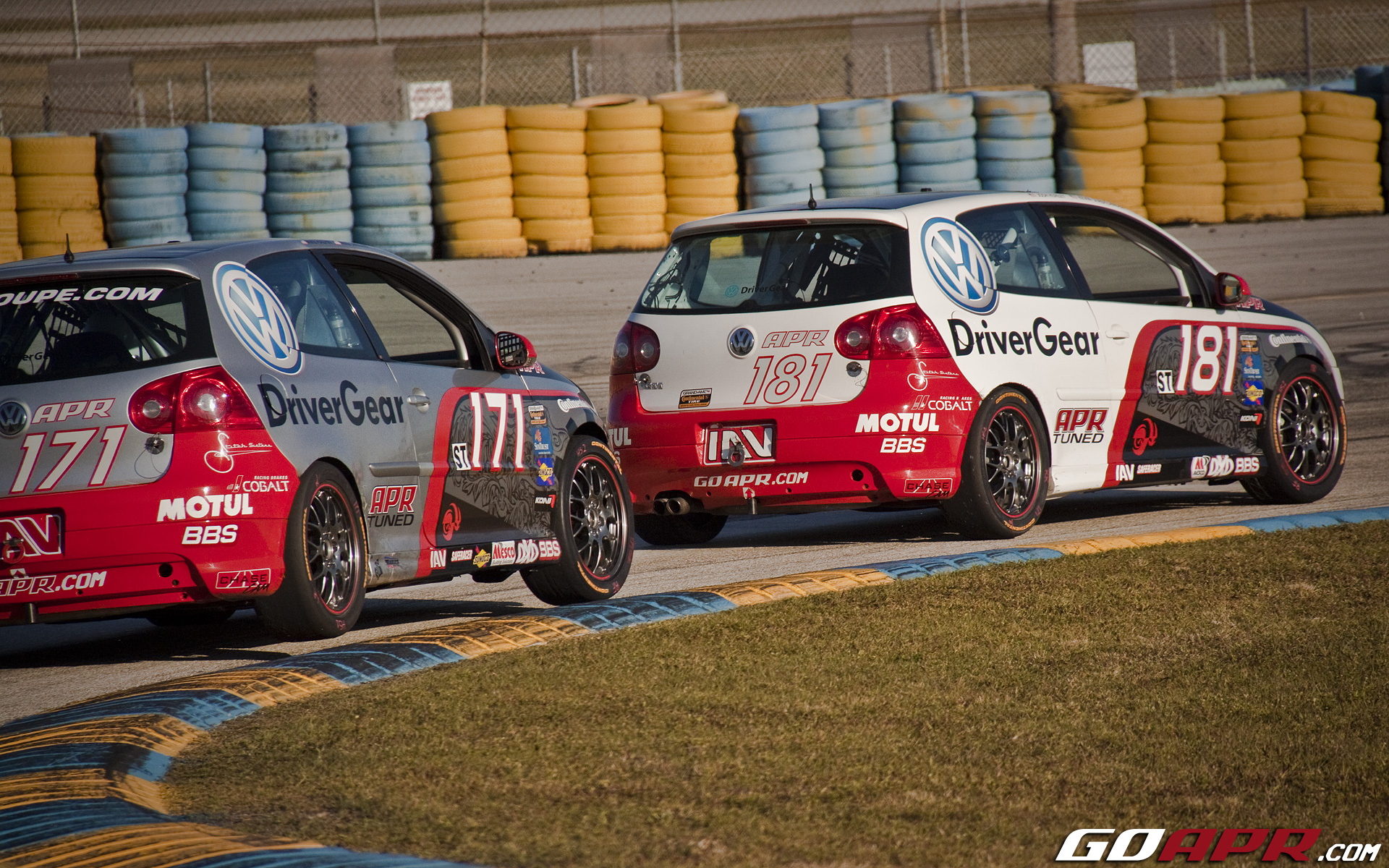 In 2009, APR Motorsport claimed their first podium finish of the year at Homestead Miami Speedway. This upcoming weekend, APR Motorsport returns to Homestead to once again battle for the top step of the podium in the Street Tuner class.

In Daytona both the 171 and 181 Volkswagen were able to battle in the top five before bad luck dropped them down the order. Now the team is focused on Homestead which is a track that the team believes suites the Volkswagen GTIs better than the first event at Daytona.

It is also the home race for the drivers in the 181 car, Josh Hurley and Kevin Stadtlander. They are both looking forward to using their knowledge of the track to their advantage, “Last year the team really began to click at this event. I believe it will be the same this year as the team has now had a race together under our belt and prior good results to build upon. I can’t wait to get on track and get another podium for APR Motorsport,” Josh Hurley remarked. Hurley’s co driver Kevin Stadtlander echoed similar sentiments, “I’m looking forward to racing at my home track with lots of family and friends coming and hopefully we can get a podium finish. That would make Saturday night in South Beach much more festive!”

Mike Halpin and Mike Sweeney are also looking forward to getting back on track, “”I’ve been waiting for this weekend since the checkers fell on our hard-luck race at Daytona. The car will be good here and this is kind of like my home track as I’ve raced here twice and have more laps around Homestead than anywhere else on the schedule. The MkVI GTI will be here soon and we need to give the old car the send-off it deserves. I think we can do that despite the power disadvantage we have to work with,” said Sweeney.

In addition to the effort in Street Tuner, APR Motorsport will once again be campaigning an Audi S4 in the Grand Sport class this weekend. Drivers Ian Baas and Daniel Orr are planning a podium effort of their own in what should be a great weekend for APR Motorsport.

About APR: About APR: APR LLC is an automotive engineering firm operating a 36,000 sq. ft. performance campus in Opelika, Ala. APR was founded in 1997 with a corporate philosophy of Integrity, Excellence and Innovation. APR’s Sole Mission is to provide the highest quality and most highly engineered aftermarket performance products available for Porsche, Audi and Volkswagen vehicles. Learn more at www.goapr.com

About Kevin Stadtlander: Pittsburgh, PA native Kevin Stadtlander is an experienced club racer with multiple wins and podiums in SCCA, PBOC, and NASA racing events. Combining his love for motorsports with his occupation as a physician, Kevin has been a member of the International Council of Motorsport Science and is currently the Medical Chief for Florida Region SCCA.
About Josh Hurley: A Fort Lauderdale native, Hurley was the 2008 VW TDI Cup Champion. In 2009, he stepped up to the GRAND-AM Continental Tire Sports Car Challenge class, winning the MESCO Rookie of the Year award, as well as one race victory, two poles and five podiums. To learn more about Hurley, please visit www.GoJoshHurley.com